From The Riser, A Drummer’s Perspective

Photographer David Phillips entered the world of music through his own PR and marketing business which he began in 2005. One of his biggest clients DW Drums asked him to visit their artists on tour, which became a great opportunity for David to take pictures to be used for advertising, brochures and social media. Since then David has photographed the likes of Metallica, Foo Fighters, Mötley Crüe, Rush and many more, and has just released his second book From The Riser, A Drummer’s Perspective II, showcasing a collection of his work. We talk to him to find out more…

Which came first photography or drumming?
Drumming! I feel this is very important, as being a drummer first I have a natural understanding of how they play and often will predict where they are going to be hitting on the drum kit and be ready to capture that photograph. To get shots like this you have to understand drummers, drums and playing live. 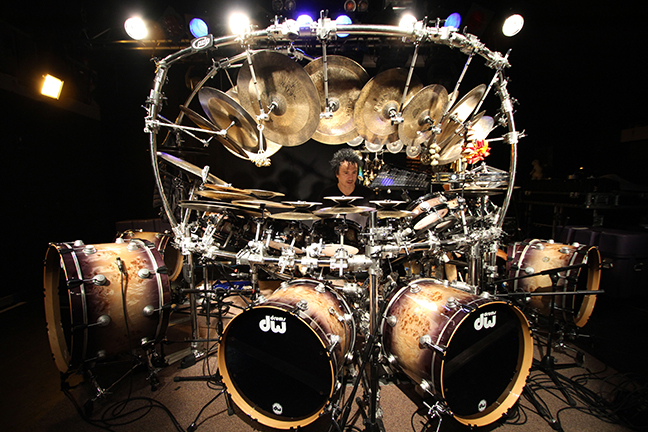 What was your first big music photography job?
You’re testing my memory here! The one that sticks out in mind in my early days of my rock photography was shooting ACDC at the NEC arena for Total Guitar Magazine. The brief was to photograph Angus Young, but as Rhythm magazine was also part of the same publishing company I also photographed drummer Phil Rudd. My photos of bassist Cliff Williams came in handy as at the time I was also handling PR for Ampeg who made his bass amps. It was a real honour to be able to photograph some of my musical heroes.

How did this progress into such big jobs shooting for the likes of Foo Fighters, Blink 182, Queen, Metallica etc.?
The connection here is my role as Artist Relations for Drum Workshop and Gretsch drums. I look after their drummers touring requirements, supplying gear for shows and providing on the road support for spares parts and rental equipment. This means as part of my responsibilities I have access to the drummers, management and crew and can request photo passes.

The drummers love it as I am putting them in the spotlight and my client likes it as they get photographic content. Drummer’s rarely get photographed so I am usually allowed on-stage access as well, which means I can not only get close but also get the view from behind the drummer and give a real backstage insight to their world. 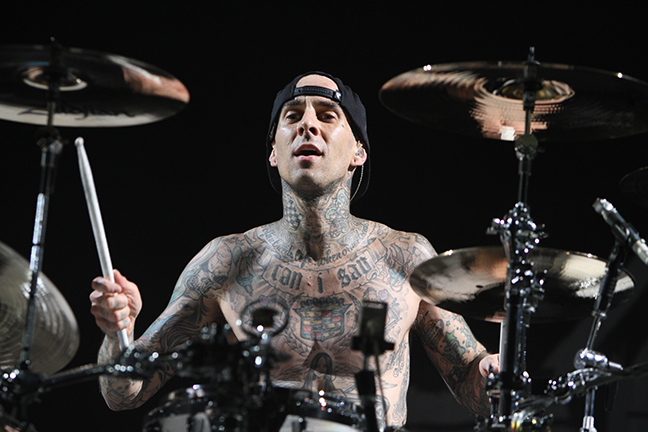 When putting my book together I selected photos of drummers in action, playing a wide variety of musical styles, taken in diverse venues and from as many interesting angles as possible. The drummers featured span a range of musical genres including jazz, heavy rock, blues, fusion, pop and many more. The pictures I chose needed to be pin-sharp, exciting and capture the essence of the live atmosphere. A big clue is in the book’s title, I wanted to give people the best view in the house, which is of course, from behind the drummer’s kit.

Rush’s Neil Peart, who penned the foreword for the book says ‘not many photographers have captured that performance art as well as David…One accomplishment is simply collecting photographs…but the greater gift is delivering such iconic images.’

In terms of who will be interested in buying my book I would say anybody interested in music and also photography will find my photos provide a very special and unique inside view to the world of drumming and live music. 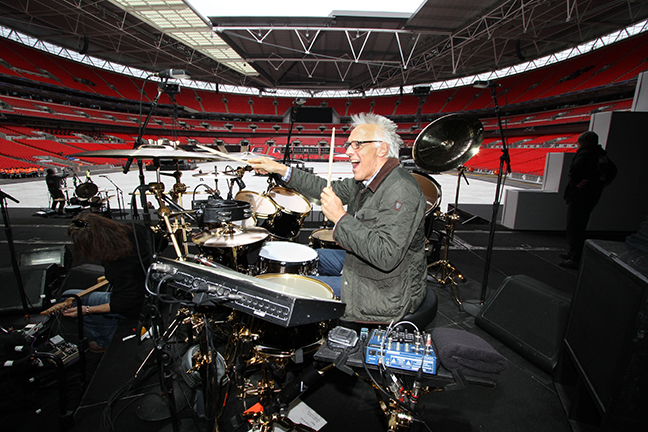 What techniques do you use when capturing drummers? How would you describe your style of shooting?
Photographing drummers is a real challenge. They are usually at the back of the stage, they are poorly lit and rarely under the spotlight. On top of all that, drummers, by their very nature, constantly move around and there’s lots of equipment in the way that can obscure the view of them. Capturing the movement and speed without getting blurred images is a skill that has taken me years to perfect. Being a drummer myself I have an affinity with my subjects. I know a lot about music, I talk to the drummers before the show and ask what they are going to do in the show. I watch them like a hawk and can anticipate when they will play a certain drum or cymbal.

With the quick changing nature of the live environment and the variable lighting I have learnt to work quickly, and be very adaptable with camera settings. I prefer to use shutter priority and it’s a balancing act on shooting at the lowest ISO I can get away with (given the lighting conditions) whilst also aiming to use the fastest shutter speed I can to capture the sharpest and brightest image depending on the available light.

Timing can be critical to capture a fleeting but important moment. The photo of Deen Castronovo taken at the very end of the show of is a good example. Deen’s drum tech let me know when the confetti was to be released, giving me a countdown, allowing me to capture this photo at the right time. 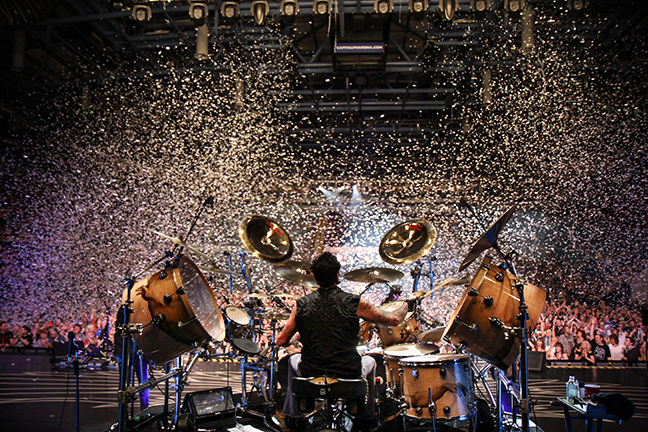 Do you have a favourite shot from the book?

Ray Luzier (Korn) at Download Festival, June 2013. No matter how small or large the crowd is, every time I go on stage to take photos I still get goose bumps as I look out across the audience. In From The Riser, A Drummer’s Perspective II, I have tried to capture images showing the energy, excitement and emotion of drummers playing live, whether it is Wembley Stadium or a small club. If you’ve ever wondered what it’s like to look out over 100,000 people, this photo of Ray Luzier gives you that perspective. 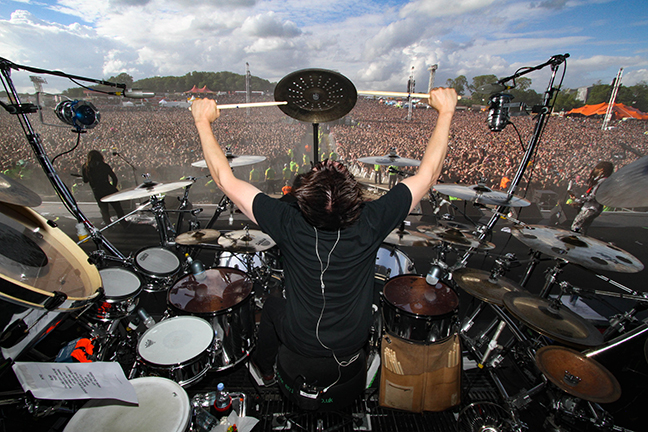 Music photographers have to work against limitations; the three song rule, no flash, often shooting from sound desks. How did you come to build up such a portfolio and rapport to be working with bands the way that you do?
Yes, you’re right there are a lot of limitations placed on photographers at concerts. In that respect I am there with the band so I’m usually given much better access and often can shoot the whole concert from stage. I am very respectful of this and take a low profile wherever possible. It helps to get introduced to the security people and also be mindful that there are crew doing their jobs and not get in the way. For example, I always wear black so I’m not so visible on stage!

My primary role when I’m at these concerts is there as the artist relations representative for DW and Gretsch and the photography role is secondary. In that respect it means I meet with the drum tech and the drummer and also get introduced to the management and crew so they are all comfortable with me taking photos and in some cases positively encourage me to get on stage to get better shots! 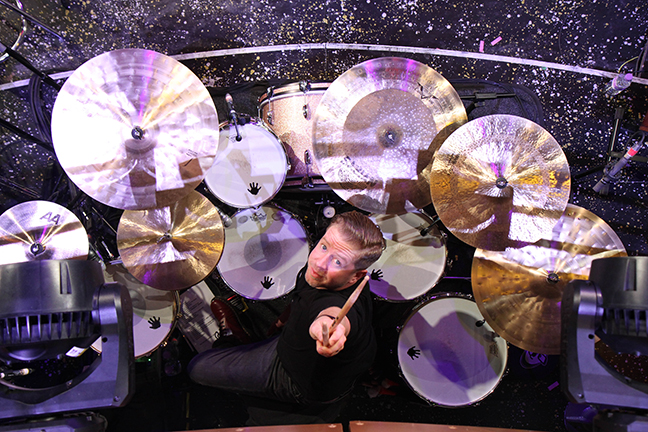 Many people think photographing musicians is glamourous and cool, what’s your reality?
Taking photos of drummers is not without its risks. I’ve had to brave 15-foot pyrotechnic flamethrowers, fireworks, avoid missiles thrown from the crowd, brusque security guards, stand in ankle deep mud and endure several falls. Back stage can be a very dangerous place!

Apart from the dangers the whole process of getting passes and waiting to take the photos can also be less than glamorous. More often than not I’ve found my name isn’t on the list at the box office and you have to track down someone to prove you have been approved which can be frustrating. You must be very patient and there can be a lot of waiting around. I often go to sound checks so you can get on stage and get some great close-up photos. These are usually timed for mid-afternoon so then you have to wait several hours afterwards for the concert to start.

Finally, if you don’t have a ticket for the show you really are kicked out of the concert by the security guards after three songs.

What advice would you give to aspiring music photographers?
Take as many photos as you can and experiment with different settings. It sounds clichéd but lighting is so critical to getting a good photo that you must be able to make the most of the lighting available and adjust your settings quickly to take advantage them.

I’d also say start by photographing local bands and get close to musicians so you can work with them and they are comfortable with you taking photos. 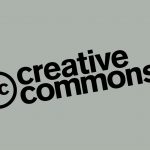 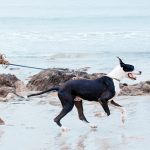 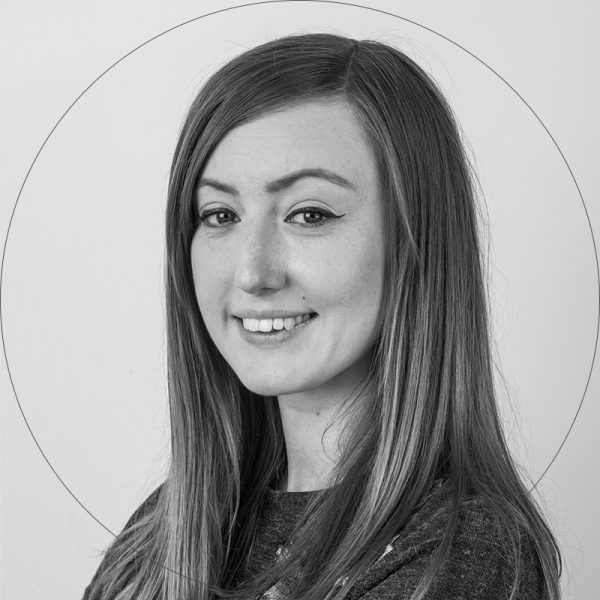