Sports and commercial photographer Vince Starr has shot for the likes of Nike, Adidas and the 2012 London Olympics with Cadbury. In his early days he assisted photographers including Annie Leibovitz and Craig McDean, photographing icons such as David Beckham.

Shooting big name athletes for big name clients means you need reliable kit, and kit that you can set up quickly. You may only have a short time with the model so you need to be prepared. It’s also especially important when collaborating with a retoucher to be able to produce an image that they can work with. With 18 years’ experience, Vince knows how to work light to add impact to his images, and regularly shares his knowledge in tutorials and workshops. Here he reveals the secrets behind one of his stand-out images. 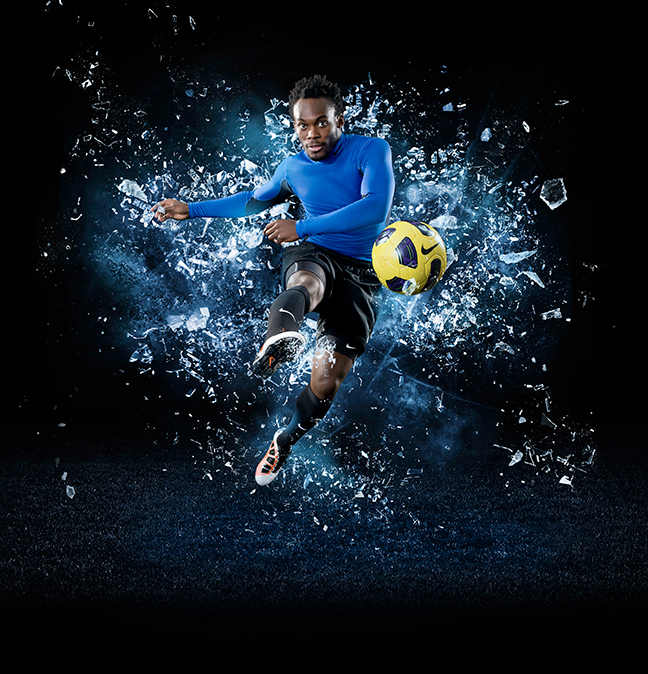 What was this image taken for?
It’s part of the Nike Boom campaign and the brief was to capture Michael Essien in a dynamic flying kick through the air, making sure the new boots and new football looked striking and well lit. The images were for general Nike advertising and press use.

Was a big team involved?
The team included art director Paul Smith from Freud Communications, global communications director Claire Parnell from Nike, the player, his agent, my assistant Tom Donald and myself. Both Paul and Claire were close by suggesting any changes they might like me to make, such as where the player was looking. The player’s agent was keeping a check on the time and if they were happy with the images. Sometimes the job isn’t just getting the images right, but also talking to clients and checking that they are happy as we’re shooting.

How did you light this image?
I used a pretty standard set-up. Two Profoto 2400W back lights (30x120cm strip lights) with Pro 8a 2400W packs to rim or clip light the athlete, the Profoto Giant Reflector as a main light with Pro 8a 2400W pack off to the side, to create contrast and some shadow on the other side, and a small floor light to add a bit of detail to the football or boot. 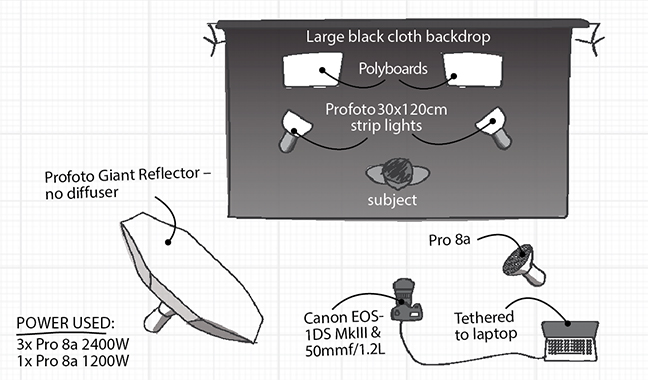 Is this set-up typical of your work?
Yes I’ve used this before and I quite like it, especially when shooting on a black backdrop. I’d prefer to have a light above the player too if there was space.

What sort of challenges did you face?
The size of the room was limiting and we had a short amount of time, but this is usually the normal run of play on these shoots. The shoot probably took about 20-25 minutes and we captured around 30 action shots and 30 portraits. Then when the player had left we captured the ball shots, moving the ball around to get different angles so the client could choose the best one to drop into the final image. The lighting was kept exactly the same for each shot. Maybe the player was rotated one way or the other, or I moved a little bit to one side to capture a slightly better angle, but the lights were always fixed.

The kicking shot took a couple of attempts to get the player in the right position and then we changed him from looking where the ball would be going, to straight at the camera.

He was kicking a bit of tape stuck on to the end of some fishing line. Throwing a ball up for him to kick can be too hit and miss and create funny body shapes with his timing being off or the ball not thrown in the right place. You also get more shots and quicker repetition with the fishing line method and the player gets in a good rhythm too.

What post-processing was involved?
The image is made up of three shots: the player on a plain black background, exploding glass (that was already provided) and the football. The images were sent to Paperhat FTP and we worked together on getting the maximum impact with the colour tones, contrast and skin tone.

We shot the football with my assistant Tom crouching down and holding the ball from underneath, with thumb and two fingers very closely together, covering as little of the under surface of the football as possible. So Tom was positioned right were Michael Essien had been kicking the tape on the fishing line so we would get exactly the same lighting on the ball as if it’d been there.

We then rotated the ball getting a good few different angles. We also got Tom to put a sock and boot over his hand and position the boot in similar positions to Michael’s kicking foot. Just in case there had been any movement in his kicking foot on the shot we wanted. Ideally the flash duration is so short that the kicking motion is frozen. 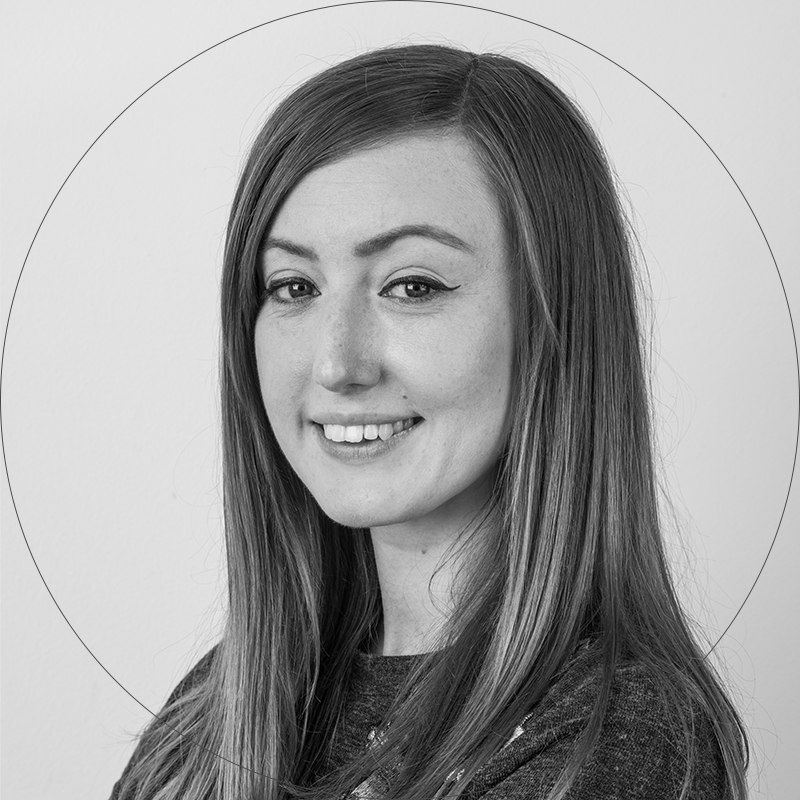