How to choose a camera memory card

Your camera’s memory card might be more important than you think. Here’s everything you need to know about cards and how to choose one.

For many photographers and videographers – particularly those early on in their journey – the memory card is easy to overlook, and with all the other kit, settings and jargon in the world of image making, that’s fair. But sooner or later, it will have an impact. So here’s what you need to know.

Other than specs, which we’ll cover shortly, the only factor you really need to consider about the SD card as a whole is whether or not it fits in your camera, which, given the card’s popularity, is highly likely.

You can get an SD card with Wi-Fi capabilities (though most modern cameras feature Wi-Fi themselves) and you can get CF cards, which are physically larger and typically faster and more durable than SD cards. External recording – that being recording directly to a device via HDMI – is also an option for videographers. All of these options, though, are more advanced and not something an image maker is likely to have to worry about for years.

The capacity of your camera’s memory card is one of two important factors, and it’s the easier of the two to understand.

SD cards range from a few gigabytes (GB) to a few hundred GB, and the amount of storage space you opt for should be based on your needs. You might need less storage space than you think, too.

The size of a photograph is primarily determined by its format, its compression and your camera’s sensor. If you’re shooting JPEG format, the average size of one photo will be around 5MB, meaning you can fit over 1000 photos on an 8GB card. If you’re shooting Raw+JPEG, which we’d recommend in most cases, files will be significantly larger. 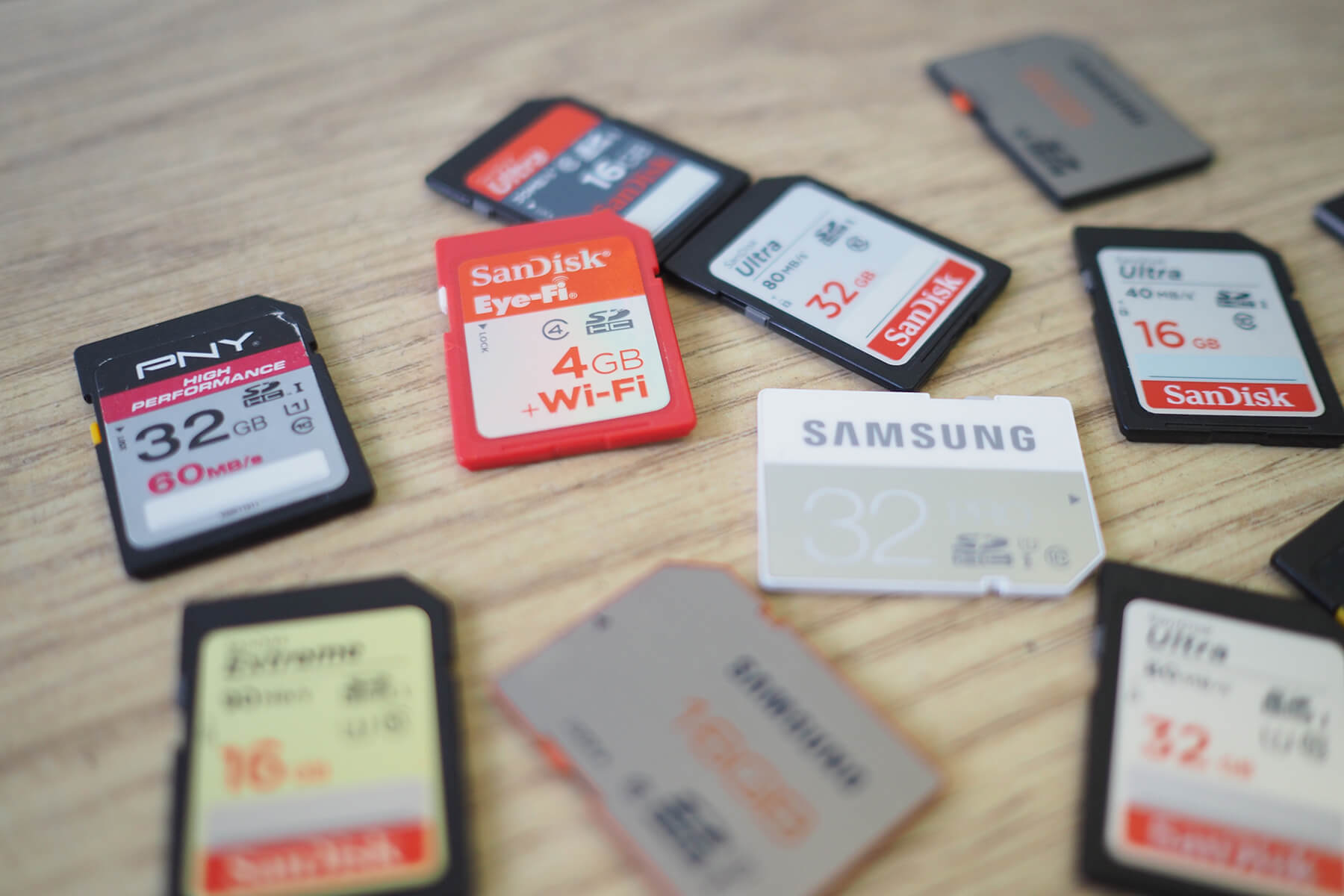 Image The cards seen here range from 4GB to 32GB. Something in the middle of this range is enough for most enthusiasts

Video recording has a set bit rate, so it’s easy to work out how long you’ll be able to record for based on your recording settings. For example, if you were recording at a bit rate of 100Mbps, 80 seconds of footage would take up 1GB of space on your camera’s memory card.

We said you might need less storage space than you think, and that’s because it’s a good idea to find alternative storage methods such as cloud storage or a hard drive for the long term. A memory card should really only be used to capture photos on during a shoot. If you keep your store your photos on an SD card for too long, you risk losing them.

The second of the important factors with a camera memory card is speed. An SD card has a read speed and a write speed, which are measured on a number of different scales. The only effect of read speed is how fast you’re able to transfer data off the card, while write speed determines how fast your card can record data. Write speed is the more important of the two, as it can limit your ability to actually shoot pictures or record video.

The first and original speed class appears as a number inside a C shape. The number – 2, 4, 6 or 10 – directly represents the card’s minimum write speed in MB/s. 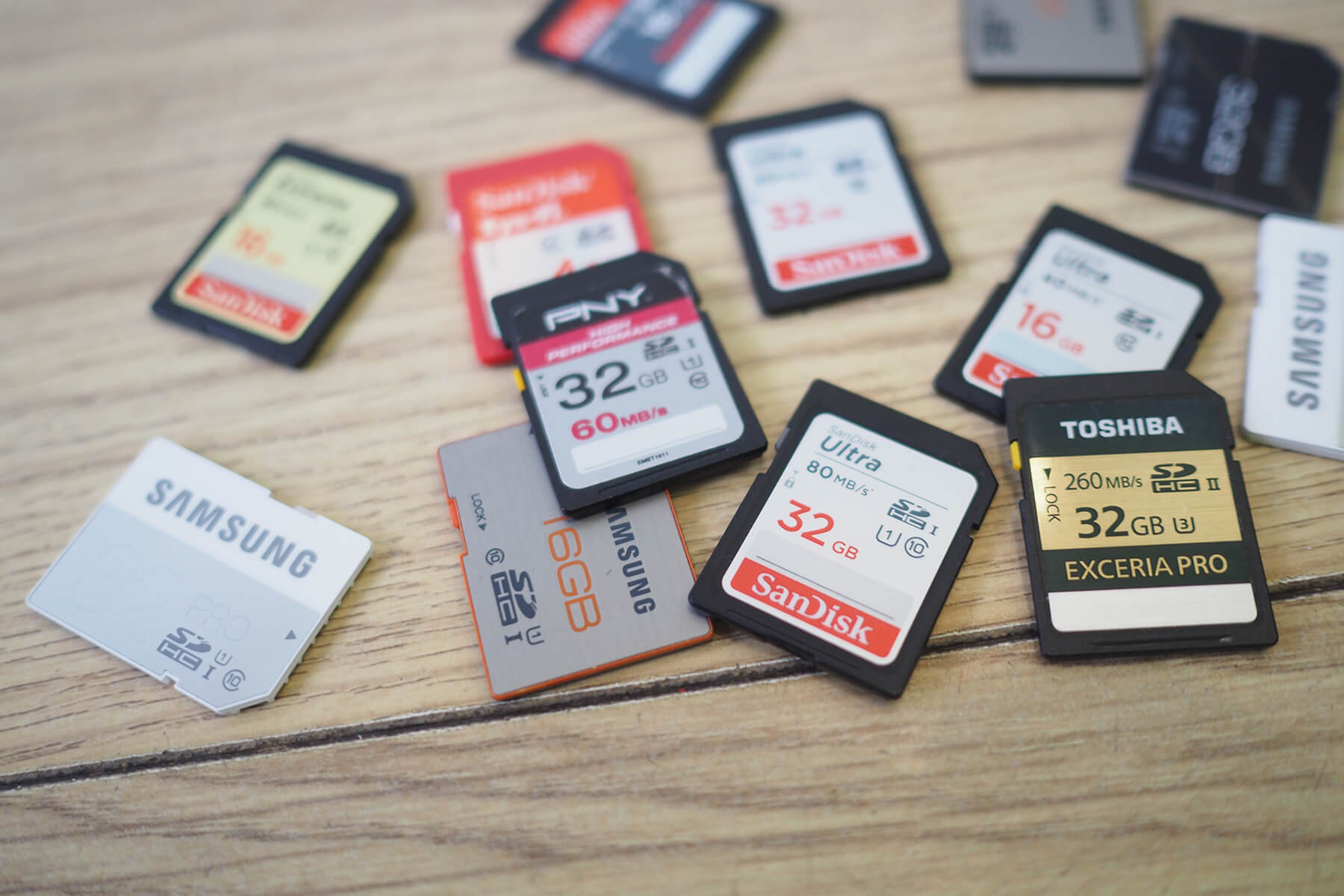 Image The SanDisk Ultra and Toshiba Exceria Pro seen here both have the same capacity, but given the difference in speed class, the Toshiba is around six times more expensive

The third measure of card speed is video speed class, unsurprisingly, designed specifically for video. The measure is represented by a V followed by a 6, 10, 30, 60 or 90. Once again, the number directly represents the minimum write speed in MB/s. Video speed class measures much higher, as video demands faster data transfer than still images.

The final and less common measure of camera memory card speed is represented as a number followed by an X. This measurement is less direct than the others, because it comes from old CD-ROM standards. Here, the X represents multiplying the number that precedes it by 150KB/s.

As simple as these units of measurement are, you may not even have to use them, as many of today’s cards feature the specific card speed on the front. It’s worth checking whether this is the read or write speed, though, as this can vary.

So, now you’re up to speed with camera memory cards. When choosing one, consider your needs based on the factors above. If you aren’t going to be taking thousands of Raw photos or hours of video at a high bit rate, you probably don’t need an extremely fast card with a huge capacity. More professional camera memory cards can stretch into the hundreds of pounds, when realistically, most enthusiasts can make do with something around the £20 mark.

For more great tips, techniques and guides, head over to our Inspiration section.

Have you become a Photography News member yet? Sign up and read the online issue, free, every month. Don’t forget to tick to receive our newsletter to get notified of the new issue, exclusive offers and competitions. The five telephoto lens tips you need to know 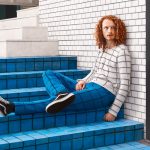 Focus stacking can be used for all sorts of genres – here’s what it...

If you’re looking to build more of a presence as a photographer, the first...