As a book of Joseph Ford’s invisible jumpers projects is published, we talked to him about his unique work and find out how the project came together. 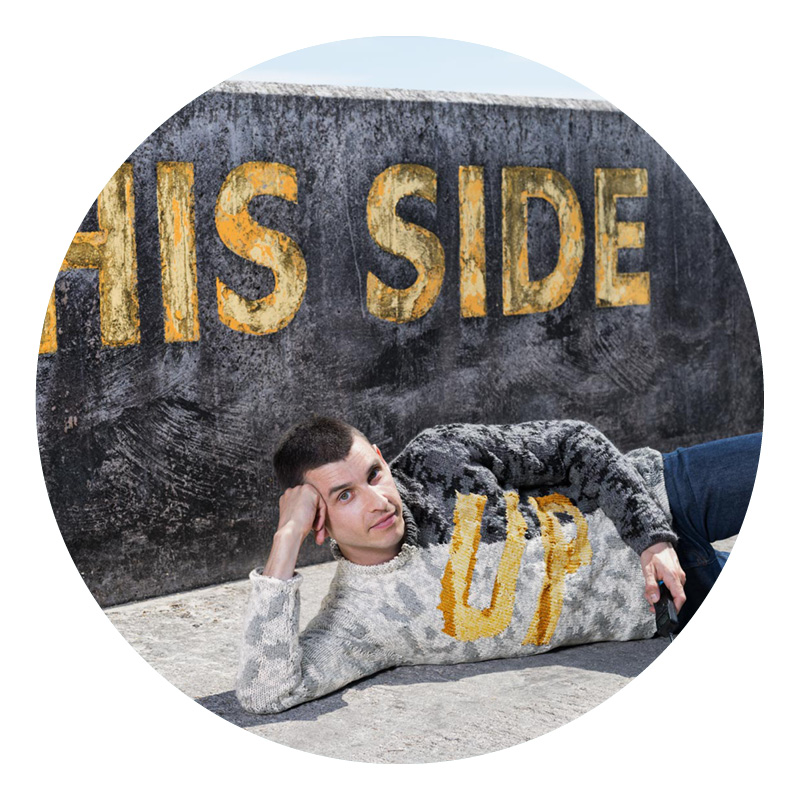 Joseph Ford has worked as a professional photographer for a number of years, shooting campaigns for countless brands all around the world. His particular style of photography has been described as ‘storytelling with a side order of creativity’. Recently, a collection of his knitted camouflage photographs were published as a book entitled Invisible Jumpers.

Where did this idea come from and what led you to commit to it as a project, especially given the time and effort it must have taken to begin?

I love optical illusions, whether it be with changing scales or with blending objects together. When I began this project I had been working for several years on a series of diptychs which matched an aerial landscape on one side with a piece of clothing or a detail of a garment on the other side.

After several years of shooting still life I was looking for a way to continue to explore optical illusions with a human element, and started working with a knitter, Nina Dodd. She loves buses and inventive knitting, and had created a jumper based on the seat covers of Brighton buses. I suggested finding an eye-catching model and photographing him on a bus. I was so pleased with the result that I came up with more ideas for camouflaged jumpers, and the series developed.

I’m always working on personal projects in parallel with my advertising work, and it’s very satisfying to be able to shoot challenging projects for myself. 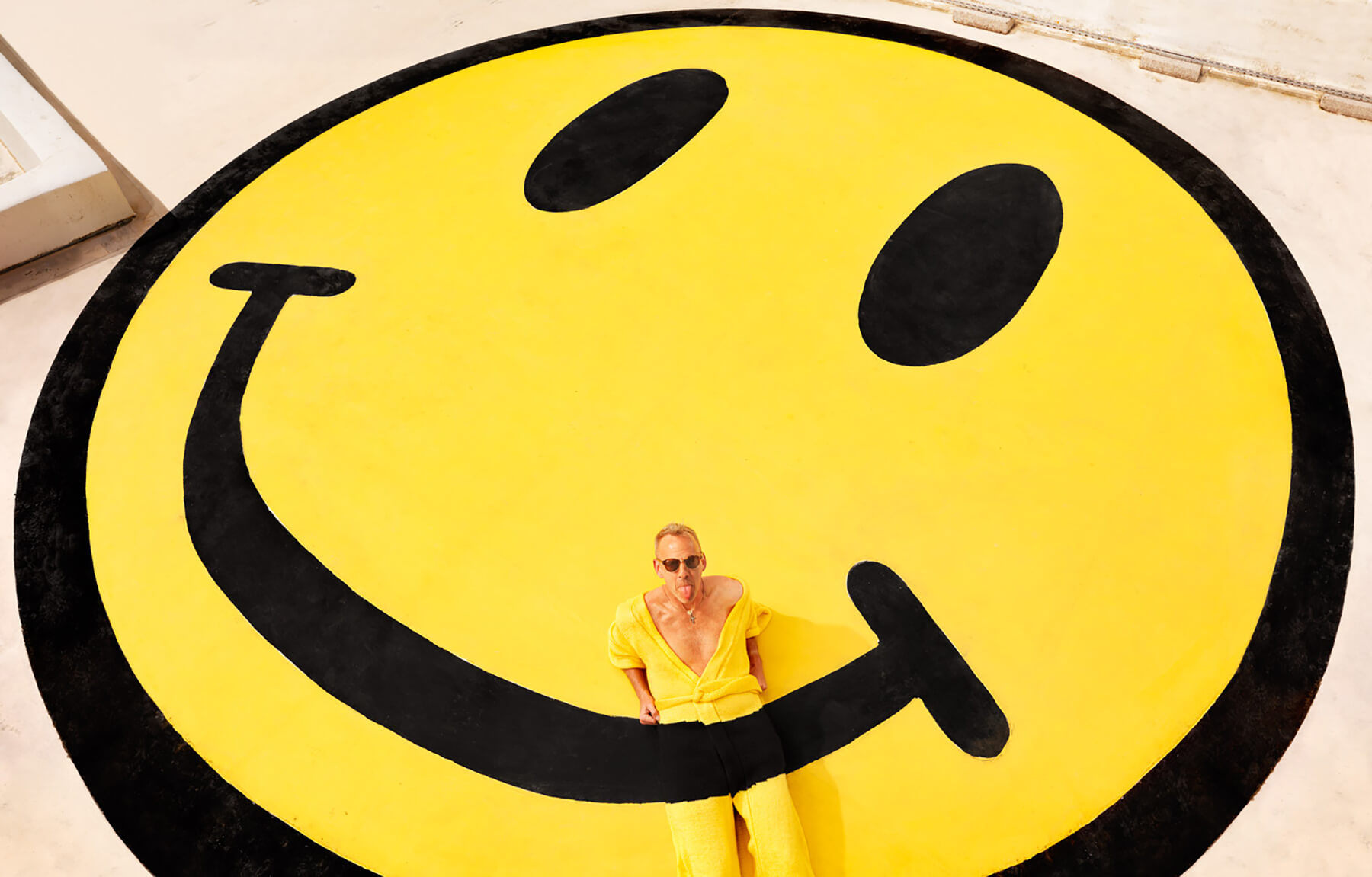 Your knitter, Nina Dodd, played a huge part in the project. How did you find her and what was your collaboration like?

I was looking for a knitter for another unrelated project, and was introduced to Nina by my wife, who works in the same university department as her. We both love challenges so every time I’ve come up with a new idea for this series and shown it to her, it has spurred her on to knit something even more complicated. 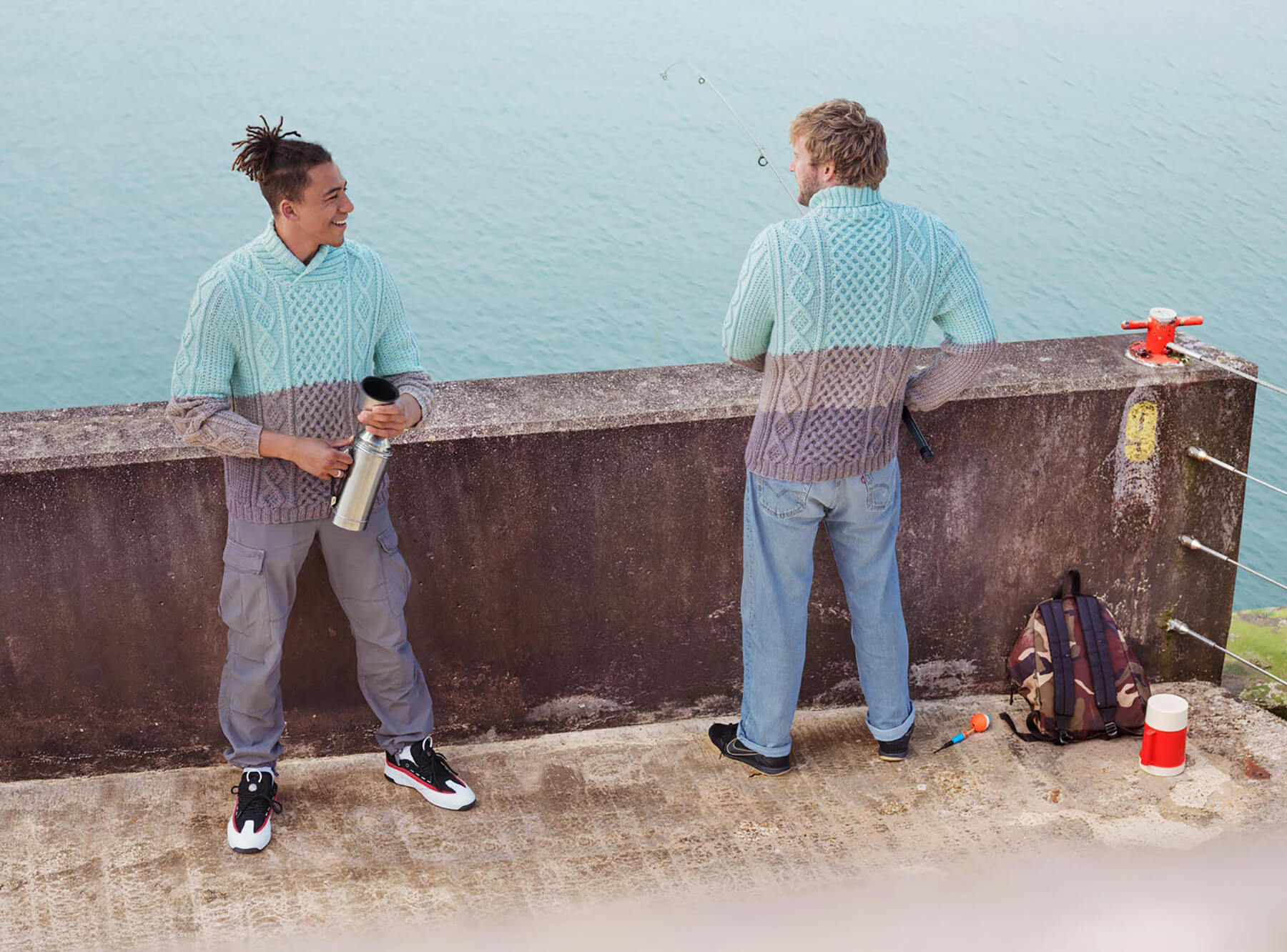 I have often begun with an idea: ‘Could I photograph someone blending into cherry blossom?’ Then I go looking for the perfect location.

The locations have to be eye-catching but simple enough to be knitted. They also have to be places that aren’t going to change too fast, as the knitting takes a few weeks. It would have been terrible to prepare a sweater and then not be able to shoot because the location had been demolished.

Some of the locations are places I’ve come across by chance and that have stuck in my head; for many others I’ve been looking for a specific type of place, like a cliff-top, and have spent several days visiting potential places until I’ve found one that I like aesthetically and that also works technically. 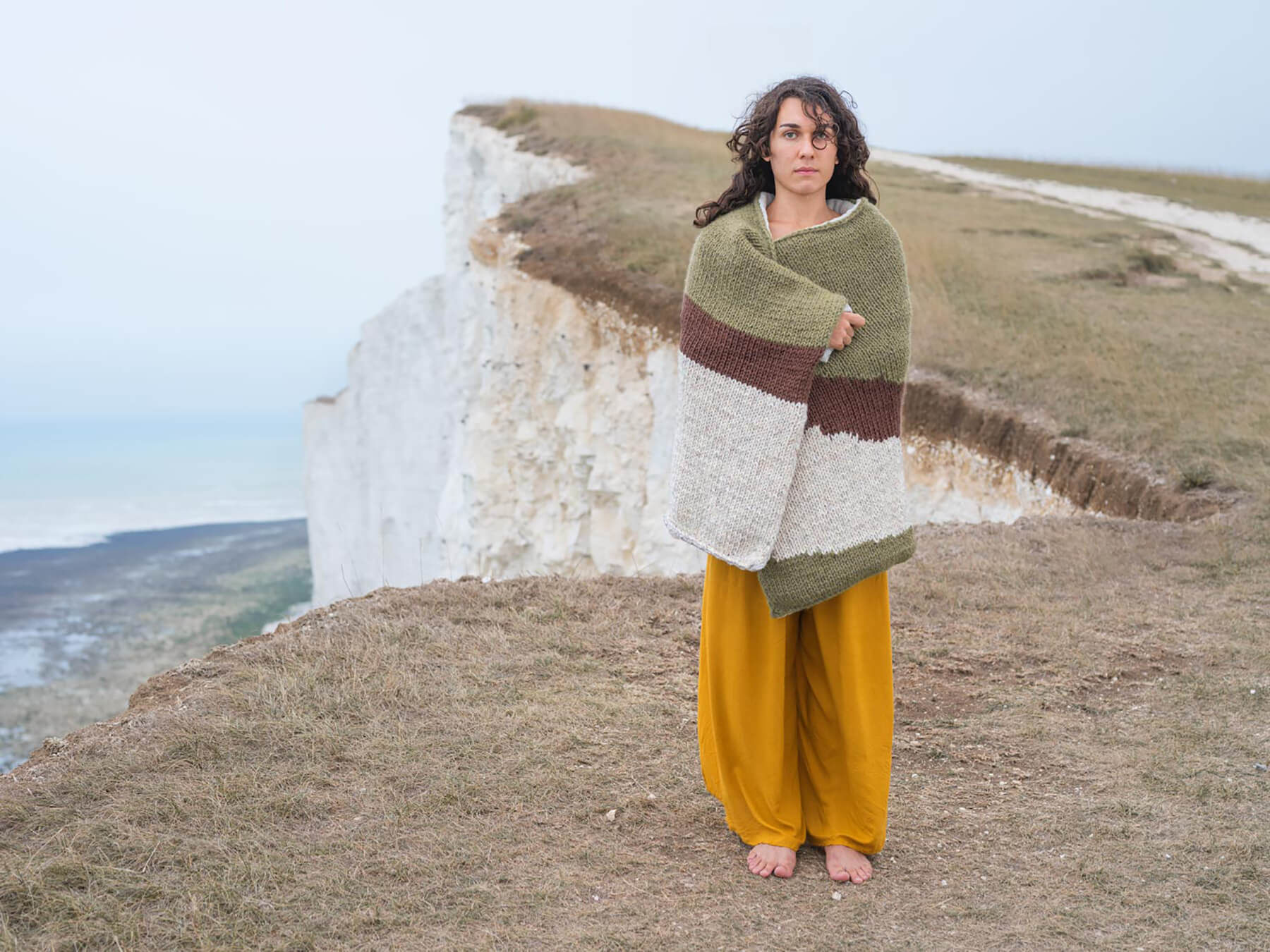 With the knitting, each photo had seen a huge amount of time dedicated to it before you could even begin the actual shoot. As a result, did you feel a different pressure with this project compared to those you’ve done previously?

Much of my professional work is in advertising. On a big job I might have been working for weeks in the lead-up, and ad agencies have sometimes been working for up to a year planning projects, so I’m used to working in a very pressured environment, where the actual shoot is the culmination of weeks or months of work for a team of people.

For most of these pictures, although there has been pressure, it’s not been anything I’m not used to. For one of the pictures I felt a huge level of pressure – the child swinging in a cherry tree. This was one of those ideas that seem great to start with and then take over your life. A year before shooting it I saw a cherry tree in blossom and thought, ‘that would make a great knitting picture’.

Every time I’ve asked Nina to knit anything approaching camouflage she’s groaned – the random patterns make it very complicated to knit. She almost refused this concept but we settled on a child’s sleeveless dress to minimise the amount of needle time required. Even so it almost finished her off. At one point she had 24 balls of yarn on the go.

Once her work was finished I waited anxiously for the cherries to start blooming. I’d found what seemed to be the perfect tree, with a backdrop of other trees, but while all the other local cherries were overloaded with blossom, these ones were bare. I visited them every 3 or 4 days for six weeks and finally, as I was about to go on holiday, they started flowering. I had wondered if I wasn’t going to be able to complete this image, and I was very worried after all the time Nina had invested in knitting a very complicated dress. 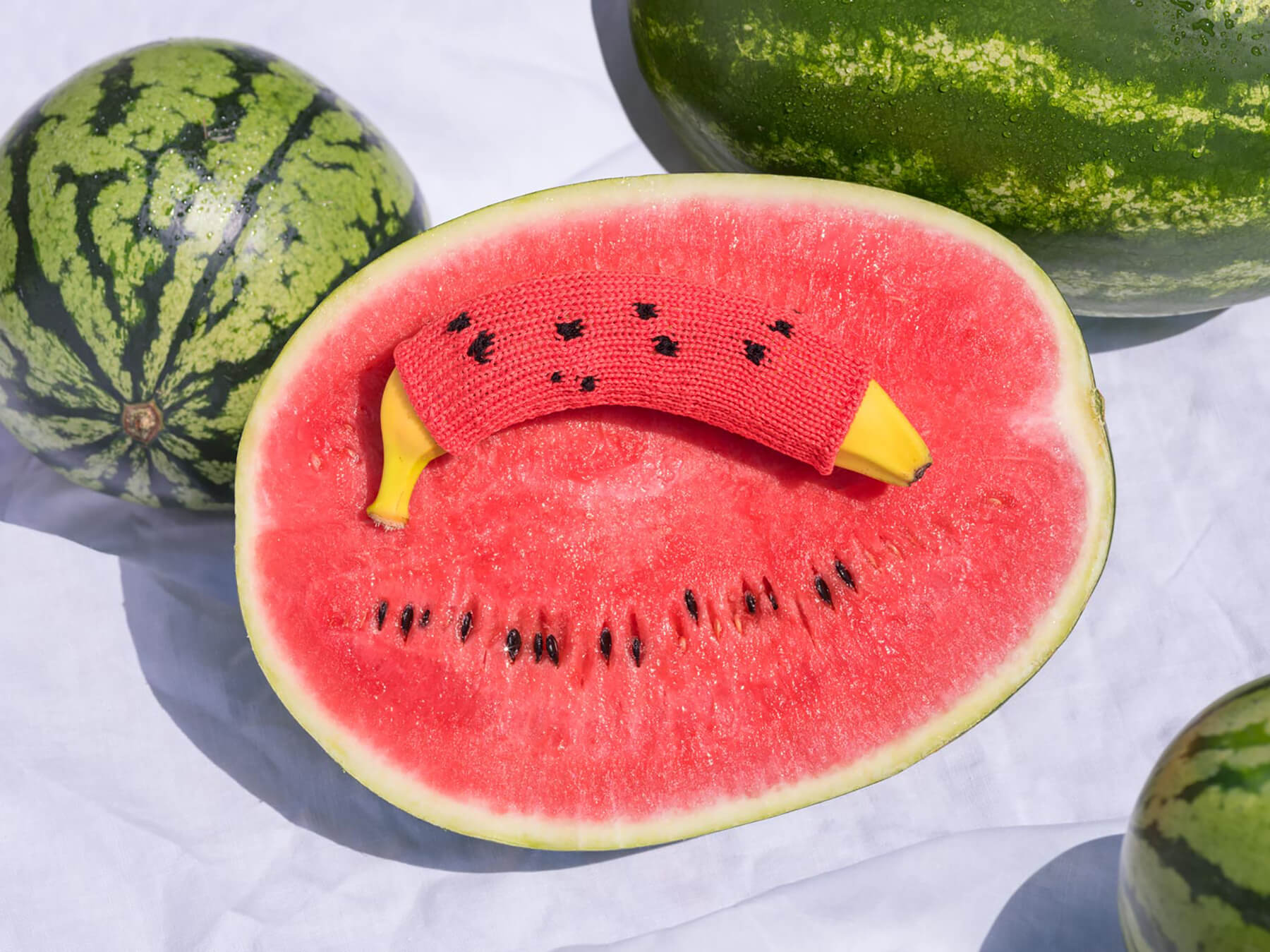 Given how engaging the other elements of the photos are, I feel the models themselves could easily be overlooked in favour of what they’re wearing. But the more you take in the images, the more you realise the models are really integral to the shots and add a lot of depth. How were they chosen for the specific photos they’re in?

I’ve wanted to photograph people who bring something extra to the shot. For the picture with the twins, I specifically wanted to shoot twins as the background was quite simple and I wanted interaction between two people to bring an extra element. For the girl in the cherry tree, I wanted someone with red hair to match the leaves.

For the picture on the clifftop, I spent two days wandering around Brighton searching for the perfect model. I was getting rather dispirited when I spotted an amazing woman. She had a mixture of vulnerability and self-confidence. I ran after her, showed her some of the other pictures in the project and asked if she’d pose for me. Generously, she agreed, and a few days later found herself wrapped in a blanket on a clifftop near Beachy Head at dusk on a cold, windy day. 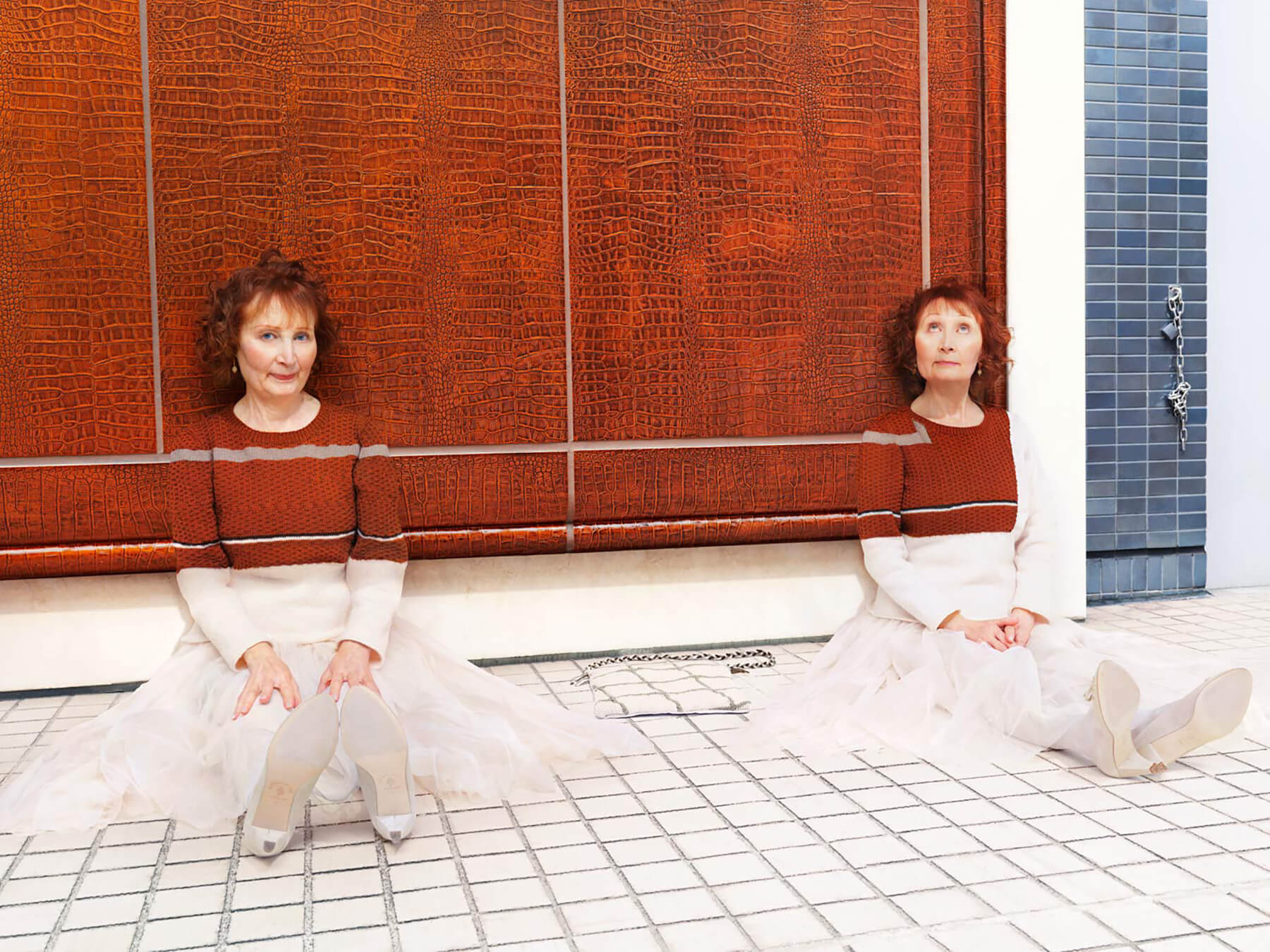 The photos were taken over a number of years. How, if at all, did your thoughts about the project change over this time?

I learned what worked well and found ways of preparing more efficiently – I now know abstract patterns are much easier to match knitwear to than straight lines for example. What I’ve wanted to achieve has remained the same throughout though.

Is there one photo that stands out for you? Maybe just visually, or maybe because it has a great backstory.

The woman on the clifftop is my current favourite. I love the contrast between the rugged landscape and the serenity of her expression. 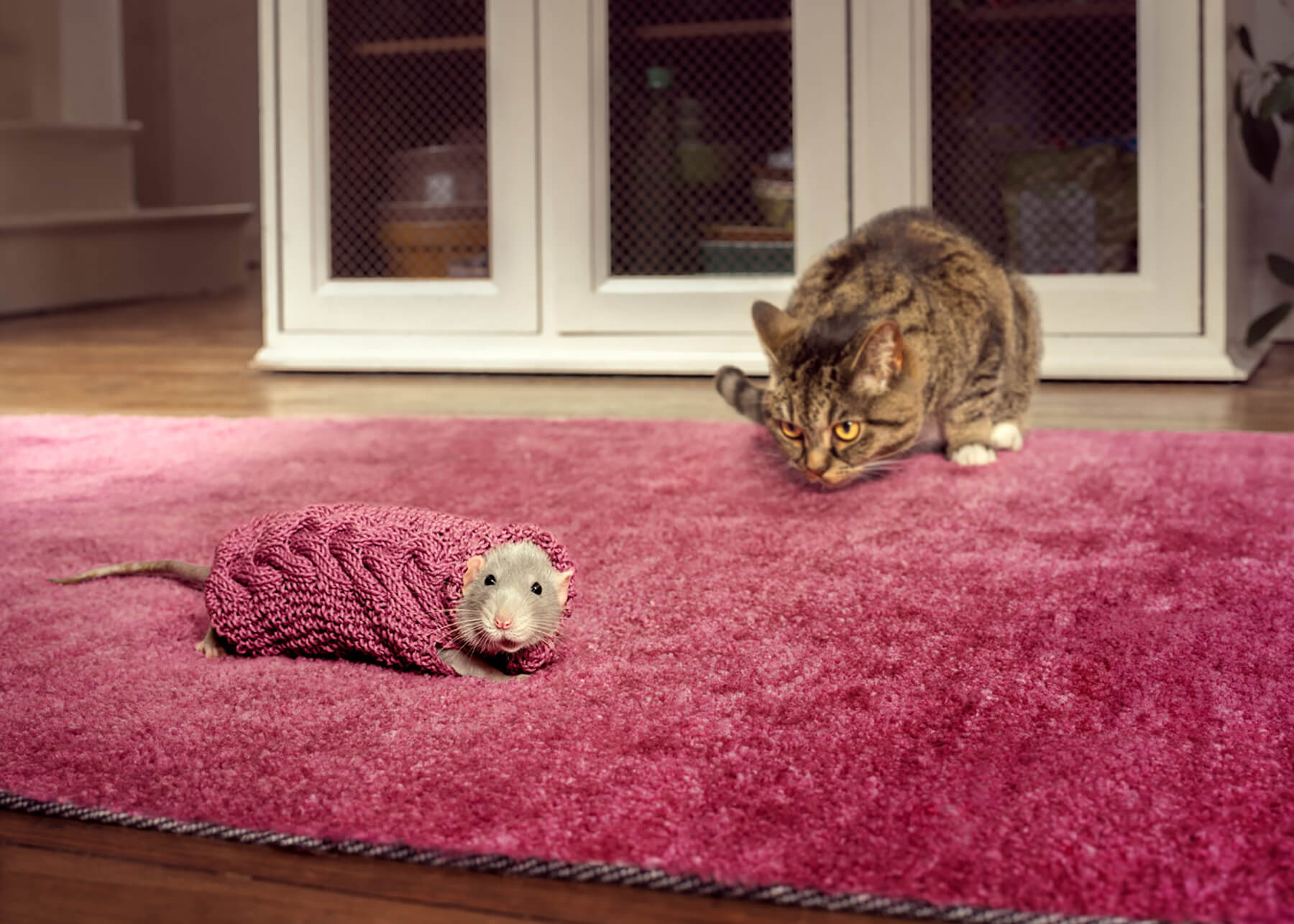 I understand you’ve done a lot of commercial work. As creative as those projects have been, did you approach this one differently?

Yes and no. Working on my own project doesn’t have any of the commercial pressures of advertising, but it also doesn’t have the budgets, so that means I have to be more inventive about finding affordable ways of creating images. On the other hand, I tend to bring a similar approach to both advertising and personal work, planning most things ahead, so when I arrive on the shoot I have a very clear idea of what I want to achieve and how to do that.

What does the future hold?

Hopefully some more exhibitions of this series. I’ve currently got a solo exhibition in Germany, and am talking to galleries about showing it in the UK. 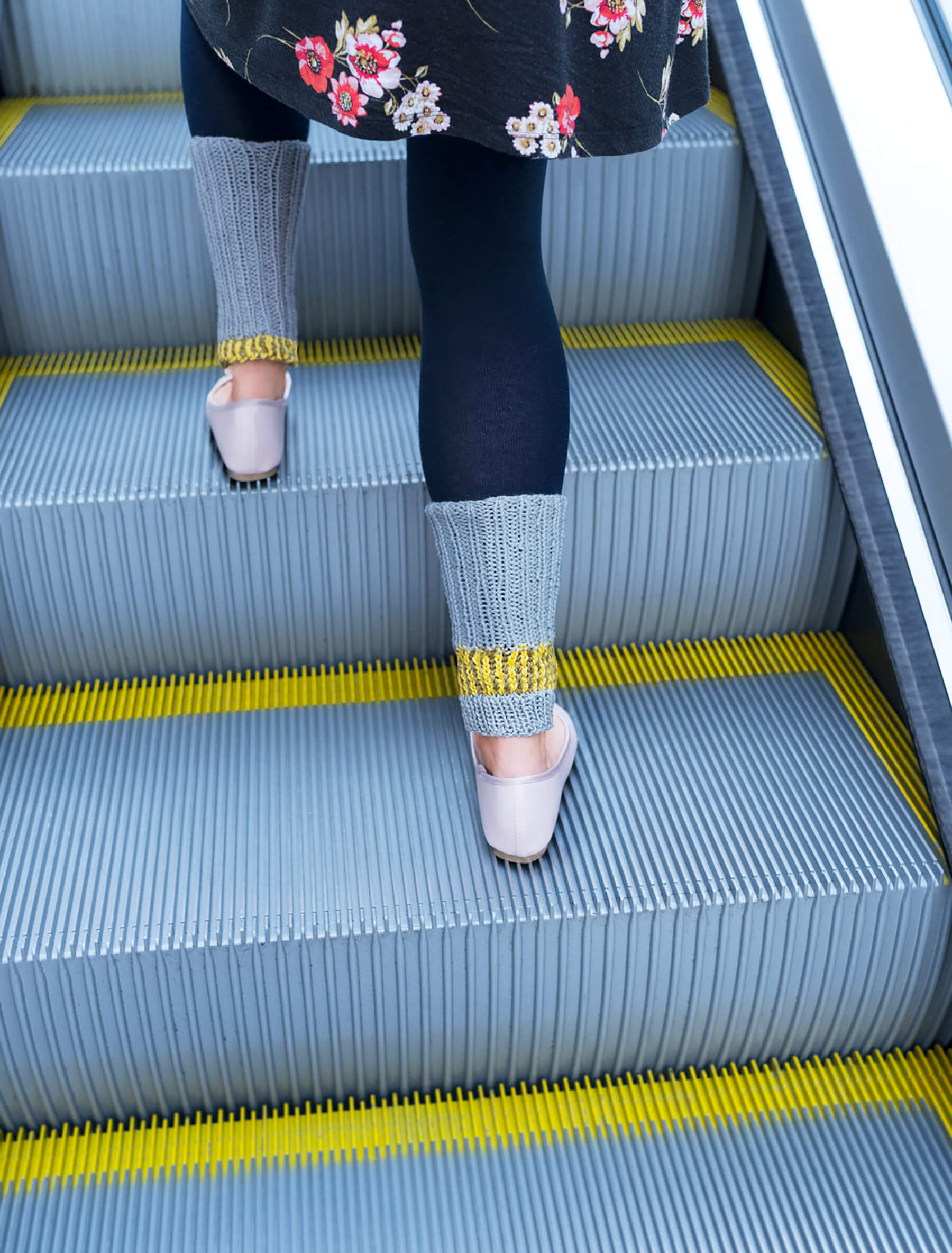 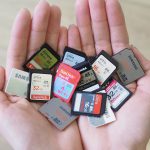 How to choose a camera memory card 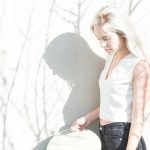 Fed up with slow software when managing your Raw files? Chillblast reveal how you...

Whether you’re looking for a canvas print, boxed frame or maybe even a special,...
Read Here