The tripod is, without doubt, one of the most integral accessories in photography. Here’s why you need one, how to use one, and what to look for when buying one.

Excluding your camera, your lens and a card to capture on, a tripod should be up there with the first accessories you buy. That may seem like a sweeping statement – after all, there are countless useful accessories on the market – but considering the practical and creative uses and the doors it will open for you, there’s no doubt. The tripod sits at the top of the heap.

Many shots will only be possible with the use of a tripod, like slower shutter speeds for example. A good rule of thumb is matching your shutter speed to your focal length, so with longer lenses, this can mean a shutter speed in the hundredths of a second or faster – and creative long exposures are another matter altogether.

A tripod is also necessary for any type of bracketing, whether it’s focus bracketing for macro or product photography or exposure bracketing for a contrasty sunset. We can add lay-flat photography to the list, as well as low-light shooting, time-lapses and video, and that’s just scratching the surface. You can even use a tripod as a stand for off camera lights or audio equipment.

Features of a tripod

It’s almost a certainty: sooner or later you’re going to need a tripod. With that in mind, knowing what to look for, knowing how they vary, and knowing which part does what is important. So, let’s break it down.

When it comes to tripods, there are two popular choices – aluminium or carbon fibre. For most photographers, price is the distinguishing factor here, but there are also differences in weight, durability and looks.

Many manufacturers make otherwise identical models in both aluminium and carbon fibre. If you have deeper pockets and the lighter weight is worth the cost to you, then carbon fibre is the way to go. Aluminium isn’t necessarily a lesser option, though, and is absolutely fine for most photographers.

There is one more small benefit to carbon fibre over aluminium. In cold temperatures, aluminium can be unpleasant to handle, while carbon fibre is less so, though naturally this won’t be an issue for most photographers.

Most tripods come with rubber feet, which play an important role, as they’re the tripod’s point of contact with the ground. They vary from model to model, so it’s worth looking into some reviews of any tripod you’ve got your eyes on. Good tread is a plus, but surface area is more important – the bigger the foot, the greater the stability. Many tripods come with interchangeable feet, with options such as spikes for greater traction on soft ground, too.

Tripods come in a wide range of heights, and it’s an important factor to consider, as the height of your camera can greatly affect your composition. A tripod that allows very high and very low shooting is rare, so it’s advisable to buy one that best suits your needs. If you photograph a lot of macro shots, you’ll likely work low to the ground, whereas if you’re a landscape photographer, some extra height can be advantageous.

The legs of a tripod are typically divided into three, four or five telescopic sections, controlled by lever or twist locks. More sections generally means the tripod has a smaller closed size, but this can mean compromising on stability. The width of the legs affects stability, too, so if you don’t need full extension, open the higher locks before the lower ones.

When it comes to lever or twist locks, the difference is marginal, although lever locks are quicker to use and tend to be firmer.

The closed height of a tripod isn’t as important as its extended height, but it’s an important consideration if you plan to carry it around much. This one doesn’t need much explaining – the smaller the closed height, the less space the tripod will take up when put into or strapped onto a bag.

The plate attaches to your camera and can be locked into or released from the head. Plates vary between brands, but the most common is the Arca-Swiss quick release system, which is compatible with many products today.

The centre column is another feature of the tripod that varies fairly significantly between models. Some tripods don’t have a centre column, while some have one that can be removed, inverted for low-to-the-ground shooting, or turned 90-degrees for lay-flats and different shooting angles.

When extended, the centre column adds more height to a tripod, but it’s unstable, so should be used with caution.

Good tripods have changeable leg angles, meaning the feet are positioned close together or further apart. It’s both another way to adjust height, and another way to deal with uneven terrain.

How leg angles lock and unlock, as well as how many positions and what those positions are, varies between tripods. Some tripods feature legs which fully detach, either to be replaced with other legs or used as a monopod.

The maximum payload of a tripod is the amount of weight it can support before it becomes unsteady. Lighter travel tripods may have a payload as low as a few kilos, while more robust models may comfortably support a payload of 40kg or more.

Bear in mind that a tripod’s payload doesn’t just include your camera and lens, but your tripod head, too, which will have its own payload. Depending on your gear, you may not need a tripod with a high maximum payload. The majority of photographers’ kit won’t ever exceed 10kg.

When it comes to weight, once again it’s best to purchase based on your needs. If you plan to carry the tripod frequently and far, naturally a lightweight model is the clear choice; if you plan to keep it in the studio or at home, the added weight won’t be an issue.

In either case, it’s worth considering that – typically and when used correctly – heavier weight means greater stability. Particularly for photographer of the go, striking a balance between weight and stability is key.

If a tripod has a ballast hook, you can hang extra weight underneath it for added stability.

Over the 70+ issues of Photography News, countless tripods have passed through our hands. As such, it would be a mammoth task for us to list every tripod we’ve ever tested here, and a mammoth task for you to read it! For those reasons, here are five models that have caught our attention for all the right reasons over recent months.

Manfrotto’s Befree range is renowned among photographers, and for good reason. The range consists of compact, lightweight travel tripods, and the Advanced Twist Aluminium sits at the cheaper end. There’s still a lot to love, though.

It allows for shooting between 40cm and 150cm, has four twist-locking leg sections with three angle positions, can support up to 8kg of kit and it weighs just under 1.5kg. It doesn’t have all the bells and whistles of more advanced models, but the centre column can be reversed which is a nice touch, and you can pick up a kit with a ball head and carry case for £129 at Wex. 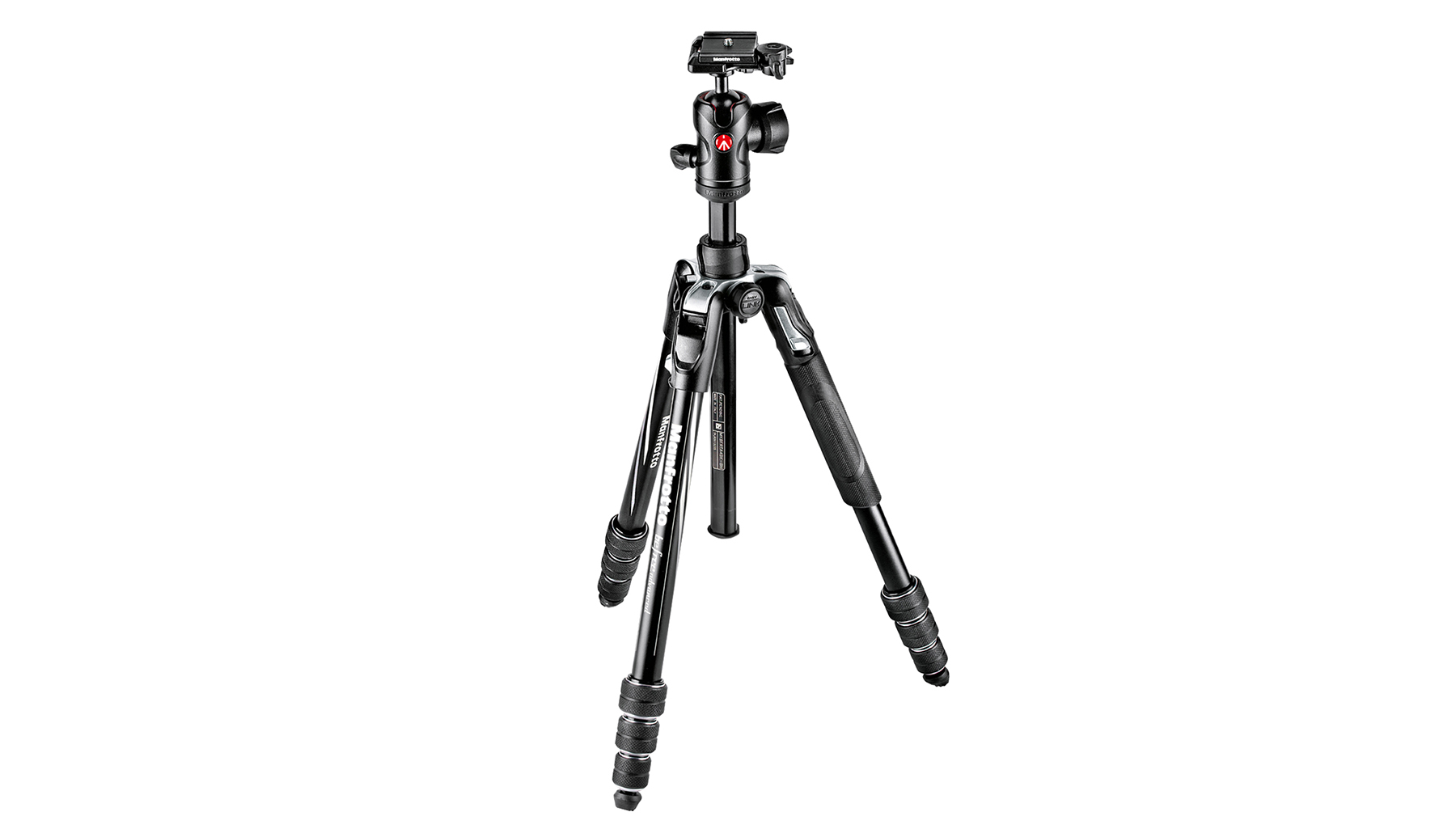 The Vanguard VEO 2 GO 235CB hit the PN test bench in issue 69, and editor Will was very impressed. Built with carbon fibre, the tripod weighs in at just over 1kg and folds down to a compact 32.5cm. As with most travel tripods, the cost of the size and weight is a lower maximum payload, which is 4kg in this case.

Still, it can support most camera systems, and at this size and weight, who can complain. Features include five twist-locking leg sections with three angle positions, a low-angle adapter and a reversible centre column with ballast hook.

You can buy the Vanguard VEO 2 GO 235CB kit, complete with a T-50 ball head and extra spiked feet, for £179.99 on the Vanguard website, which isn’t a bad price at all for a carbon fibre kit. 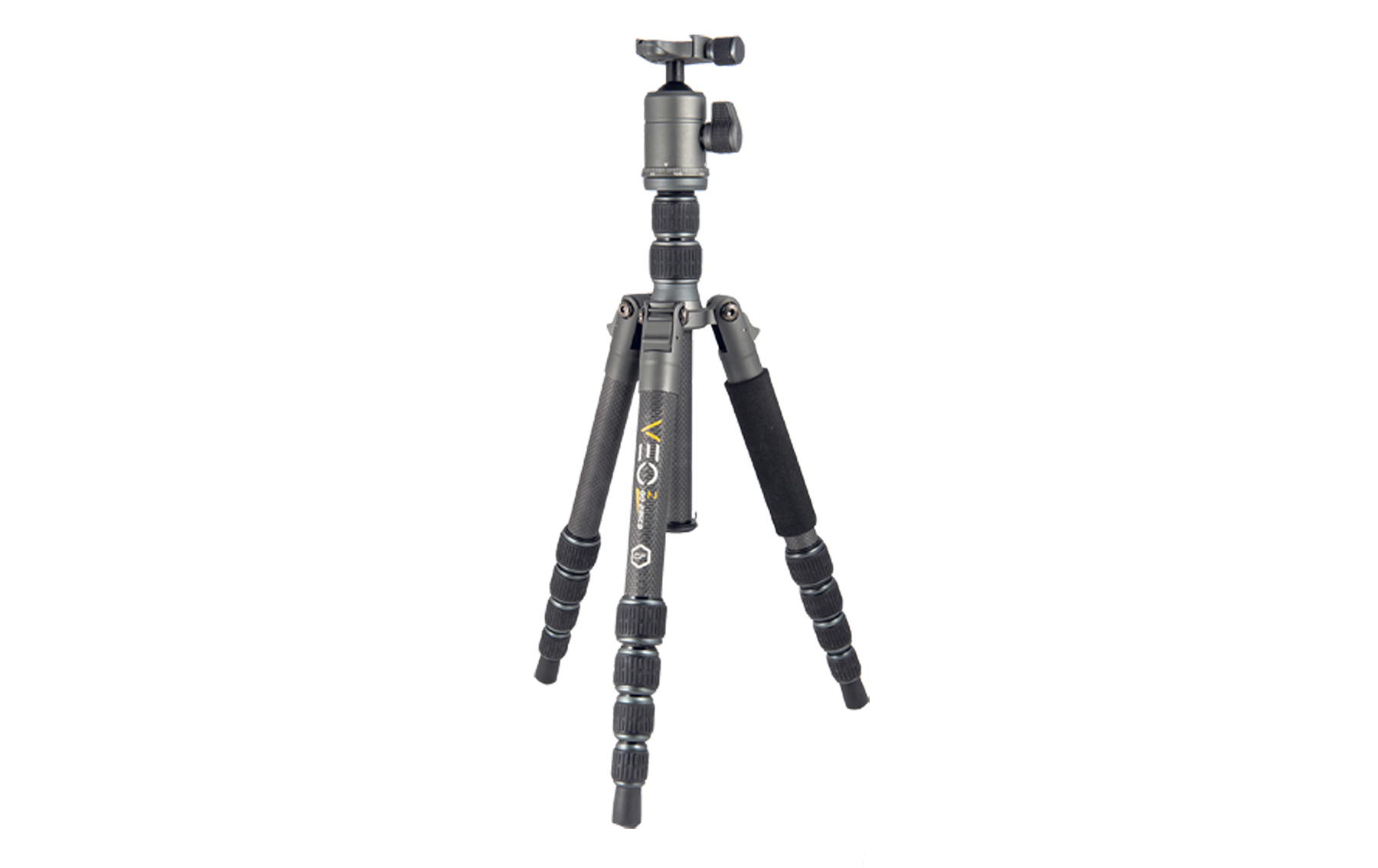 As part of Benro’s iFoto travel collection, the FIF28CIB2 is in good company. Editor Will put it to the test in issue 68 and gave it some glowing praise. Folded down to 46.5cm, it’s on the larger side for a travel tripod, but it’s also taller than many, extending to 1.65m. The lower end of the height range and weight aren’t compromised as a result, with a minimum height of 46.5cm – lower still when the centre column is reversed – and a weight of 1.72kg including head.

The most impressive thing about the FIF28CIB2, though, is its stability. It has a maximum payload of 14kg, and in testing, Will found it to be very stable even at its max height. Another great feature is removable legs, which can be taken off to form a monopod.

The FIF28CIB2 – the carbon fibre version of this tripod – can be bought online on websites such as Wex for £219 including ball head, spiked feet, tools and carry bag. An aluminium version is also available for £119. 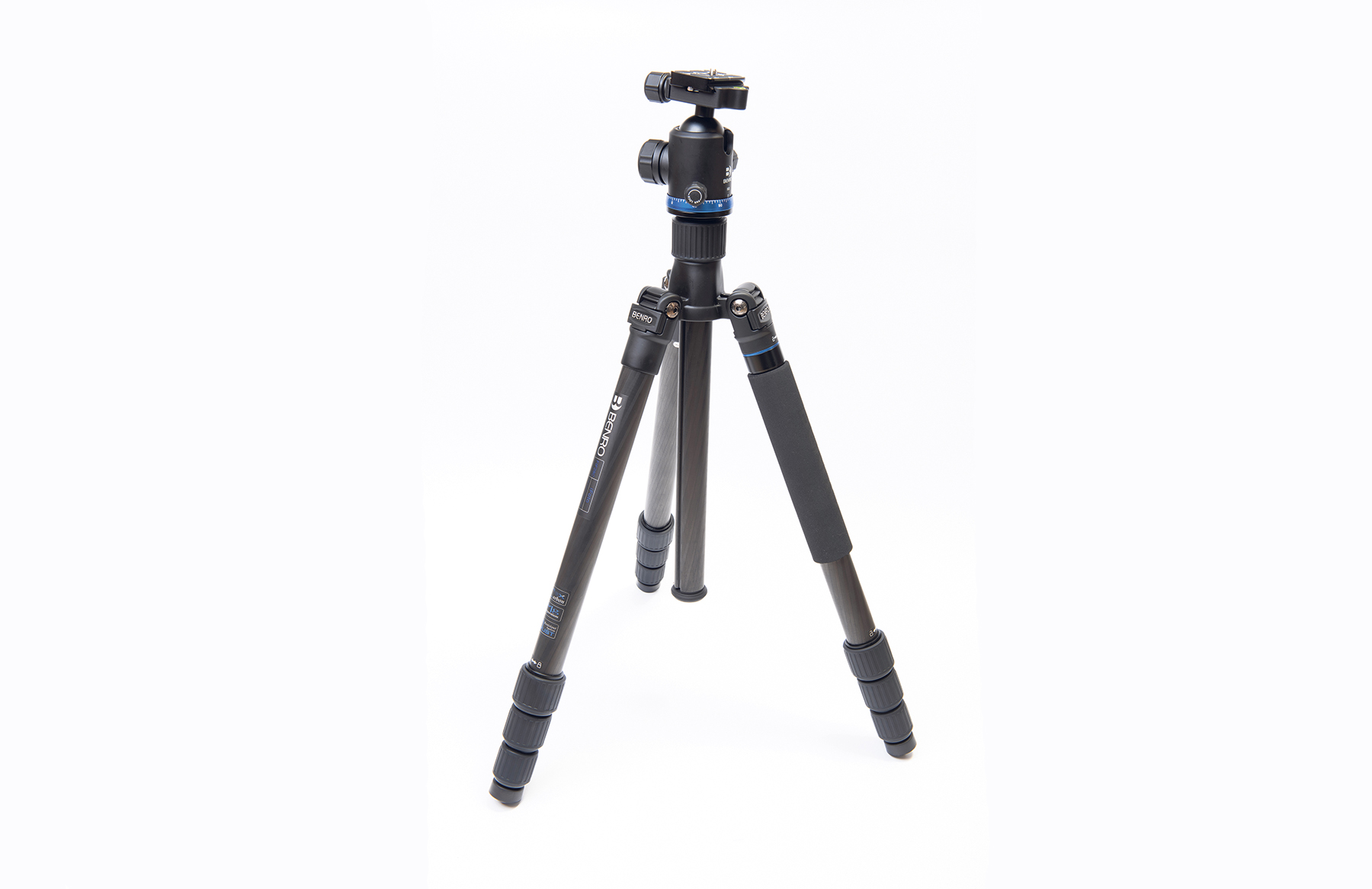 We covered the launch of 3 Legged Thing’s Leo 2.0 in our news section recently, and if the original Leo wasn’t loved enough already, things just got better.

The Leo 2.0 is packed with features, including detachable legs that can be reconfigured into a monopod, a reversible centre column, multi-point mounting and changeable feet. The tripod’s max height is reasonably low at 1.31m, but so is its minimum height at just 12cm. Despite a weight of just 1.44kg, the Leo 2.0 can take a max load of 30kg when legs are angled at 23-degrees.

As a kit, the Leo 2.0 retails at £289.99 which is, of course, pricey, but a carbon fibre tripod with these specs is an advanced piece of kit, so it comes as little surprise. 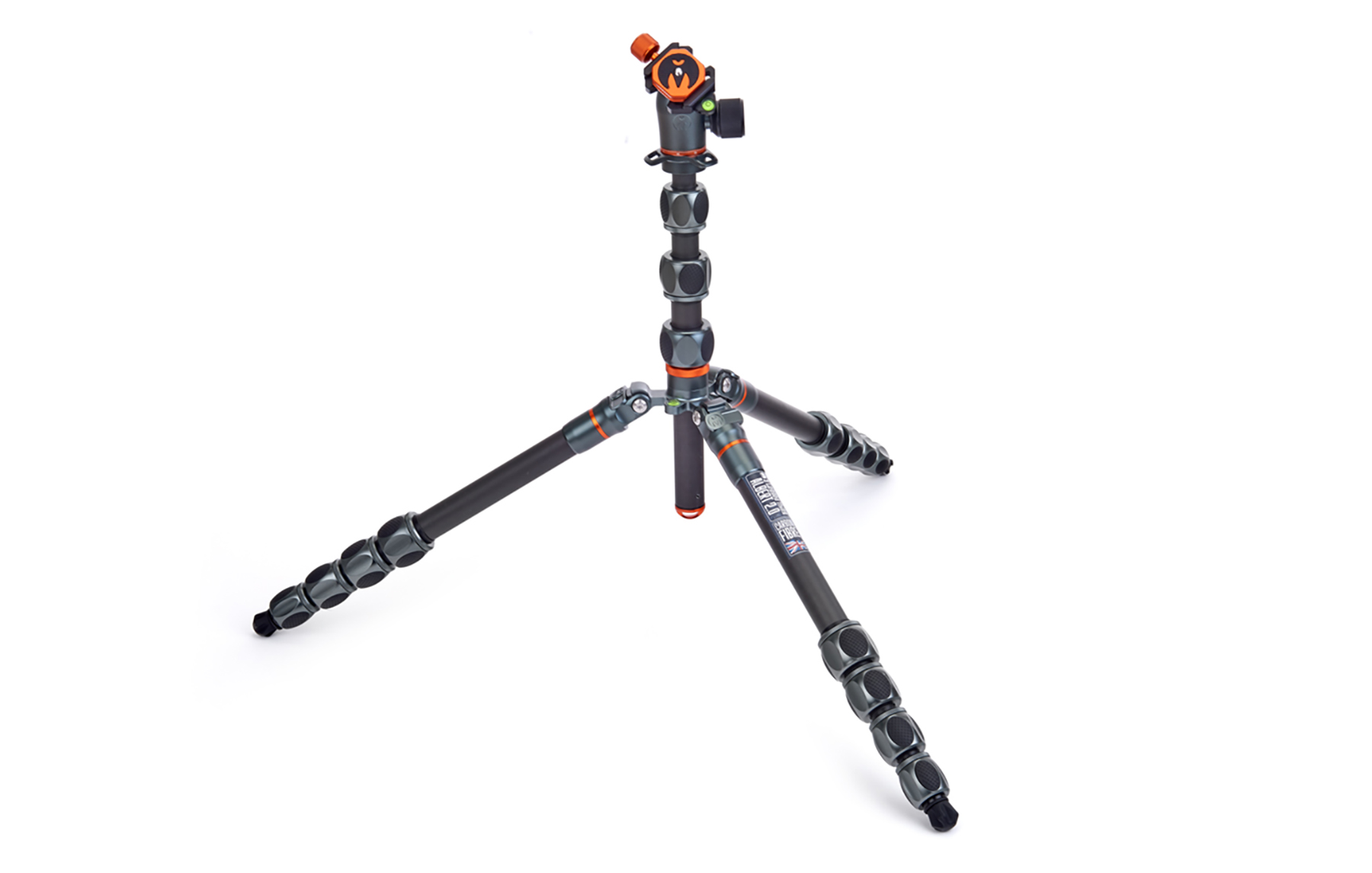 This inclusion is a different to the others for one significant reason – this tripod retails at £32.99. We felt the Neewer Portable was important to include particularly for photographers early in their journey.

We haven’t tested this tripod, so we can’t comment first-hand on its quality, but pure specs can speak for themselves. The tripod’s height ranges from 44cm to 1.34m, it weighs in at 1.8kg and has a maximum capacity of 4kg. There are a few surprising features, such as the ability to reconfigure into a monopod, and the price includes a 3-way swivel pan head.

We can’t say if the old ‘you get what you pay for’ adage applies here, but at very least, it’s worth a look for the beginner photographer. 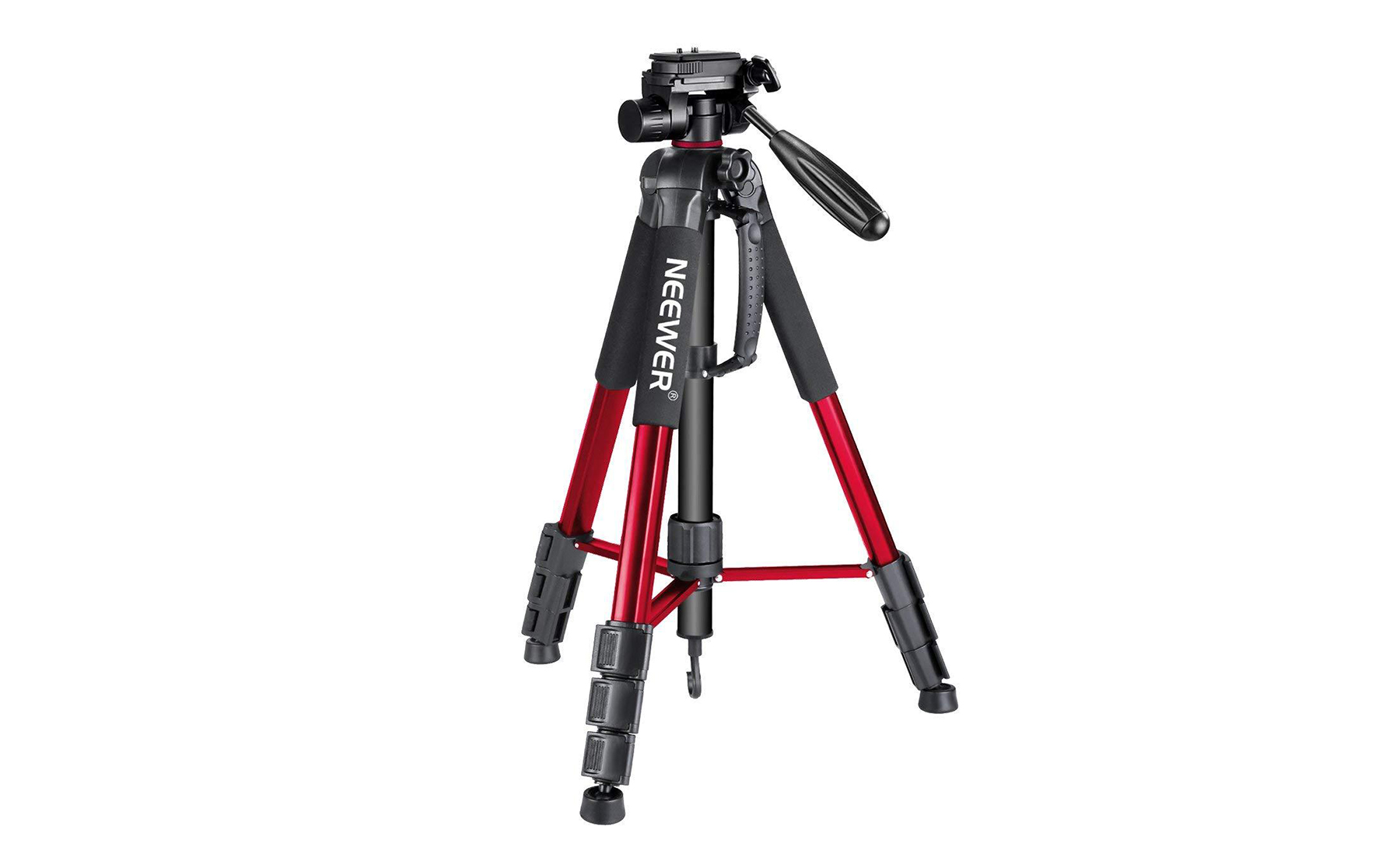 If you’re interested in more tripod reviews, take a look through our issue library. A tripod or two can usually be found in an issue’s First tests section.

Take on the 365 photo challenge